ServiceNow: The Journey So Far

ServiceNow has experienced and enjoyed huge growth since their inception in 2004. Their current plans are to prioritise ongoing UX improvements, as well as platform investments in a native virtual agent and machine learning functionality, to help keep them at the top of their game.

We look at the key milestones that have led to the success and recognition that ServiceNow have achieved so far.

In July 2005, ServiceNow raised its first funds of $2.5 million with a 'Series A' round led by JMI Equity (followed by another two rounds of $11 million in total, over the next few years). In 2005, ServiceNow sold its first contract to an offshore gambling site called WagerWorks. With only a few dozen employees, initial growth proved slow with a few million dollars in revenue during their first few years.

In late 2009, Sequoia Capital led the firm's $41.4 million 'Series D' round. Managing partner Doug Leone says he had "never seen such positive reviews" from customers, and ServiceNow's revenue was now doubling annually. ServiceNow became cash-flow positive which allowed them to pursue deals with clients like Deutsche Bank, Intel and McDonald's, whilst also growing to 100 employees.

In late 2011, ServiceNow found themselves at a crossroads when VMware offered $2.5 billion for the company. Luddy was keen to sell the business as he thought ServiceNow's product map could thrive within VMware, and the sale would mean financial security. But according to Leone, Sequoia saw that as 'giving the company away'. Leone saw an easy path to $10 billion and put his money where his mouth was, offering to buy out anyone at the VMware price. Ultimately though, no one bit.

By 2016, revenues had hit $1.39 billion and the market cap was $12.34 billion. Leone's prediction of exceeding $10 billion had come true, and ServiceNow's team realised they could become even more profitable. Why stop at just service IT departments? ServiceNow's software and reputation meant it could now branch out into other areas, from customer service to human resources.

ServiceNow projects about $2.4 billion in 2018 subscription revenue, and while the majority of that will still come from growth in the IT side, the "emerging" categories are expected to make up at least a third of new annual contract value this year, up from less than 20% at the beginning of last year. The opportunity presented by these offshoot verticals, estimated at $34 billion by Credit Suisse analyst Brad Zelnick, is even larger than the overall cloud-based IT market, which is about $27 billion.

In January 2018, ServiceNow spent $15 million to acquire DXContinuum, which is used throughout ServiceNow's cloud platform to help customers build predictive models that make it easier to categorise incoming requests. In May 2018, ServiceNow bought the AI startup Parlo for its technology in natural-language understanding, which the company plans to inject into its core platform to help customers build intelligent business apps, complete with easy-to-create service catalogues, notifications and assignment tools.

ServiceNow ended 2018 as Forbes 'World's Most Innovative Company of 2018'. 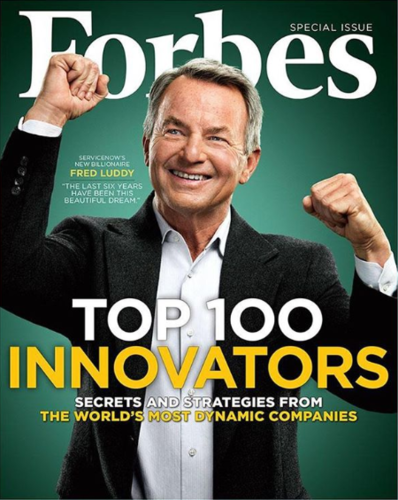 As ServiceNow look to the future, their focus is specifically on digital transformation. Because every industry and company are being disrupted by software, and every company are embracing digital technology, it means that lots of companies are finding real value in automating time-consuming and inefficient chores in IT, HR, customer service and security. But it's not just about automating them, it's about making them smarter and simpler to deliver better experiences for customers and employees. In many ways, that's the very foundation for digital transformation.

"We're kind of building out the team that you need to compete on, not just the path to $4 billion, but the path from $4 billion to $10 billion" Donahoe said.

"So, for instance, user experience: you've heard me and other ServiceNow exec's talk about the importance of user experience, the importance of mobile. Well, a year ago, we had 25, 30, maybe 40 user-experience people. Now we have 100, and we've hired really strong people. We took advantage of getting a group - we made an acquisition and a group of user-experience professionals who were available, and we moved on it" Donahoe disclosed.

"But," Donahoe emphasised, "we're building out functions thoughtfully. And these are the functions that we're going to need to grow into the future.... Our teams in Germany, our teams in Japan, our teams in markets that have huge upside. We want to make sure that we're, again, capitalising on the opportunity we have, and getting the right leaders and the right teams in place."